My life had been blissfully free of Annoying Orange until last week, when I was asked to make him for Jakob’s 10th birthday.  How could one refuse the demand of a kid starting his second decade?  I found myself totally unable to watch the show on YouTube but did find some good images through Google and enough key details from Wikipedia that I felt able to take on the challenge. 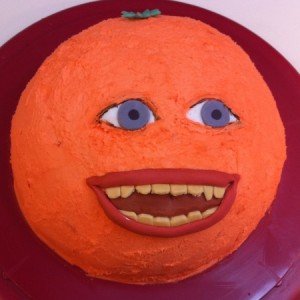 The final creation, made from layers of Victoria Sponge sandwiched with marmalade buttercream and carved into half a sphere, was coated with orange-coloured buttercream and decorated with features formed from coloured fondant.Truly annoying, indeed!