Coming from a country where Doctor Who has been part of our DNA since it first appeared on BBC TV in the early ’60s, this was a great opportunity to introduce The Daleks to a class of American second graders. 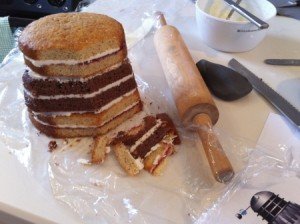 I mocked up a template to work out size and shape then constructed the base from layers of chocolate and vanilla sponge, cut to shape. I used the template to make runouts of light grey royal icing for the side panels and attached them to the base with a layer of dark grey buttercream, then piping on the dalek bumps. 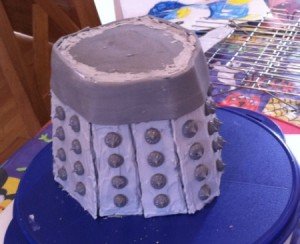 The dome was made separately, with cake layers carved into an hemisphere, covered and trimmed in dark grey fondant, then glued in place with more buttercream.Eyestalk, gun mount and telescopic manipulator arm were formed from fondant wrapped around a wooden skewer, with details piped on in royal icing.

After a short introduction to The Doctor and his arch enemies, the children effectively destroyed their first Dalek. (…though we have yet to convert many of them to Doctor Who fans!)

(If you want to find out more about Doctor Who and the Daleks, here is the official BBC website and some useful info on Wikipedia.) 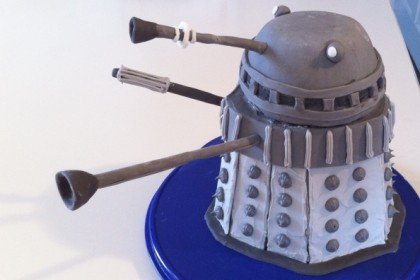