This cake, one of a matching pair, was a reinterpretation of my earlier martial arts cake in the medium of ice-cream – one vanilla, the other chocolate with a vanilla skin – for a set of twins who had just been awarded a fourth stripe on their blue belts.

I first made two large round cakes – one chocolate, one vanilla – and let them cool, then placed a ½” layer of cake in the bottom of two 9″ spring-form cake tins. 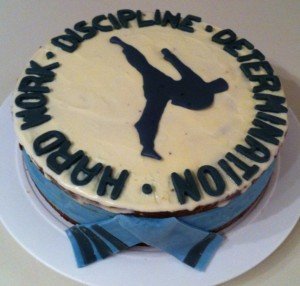 After wrapping a band of coloured fondant around the inside of the tins, I used a blend of cake crumbs and buttercream to form a ½” shell into which I pressed pre-softened ice-cream, smoothing the top to create a base for the decoration.  (For the chocolate ice-cream cake, I added a thin layer of vanilla ice-cream to form this base.)

I carefully removed each cake from its tin (after some gentle re-freezing) then added the decoration.  As before, the logo was a royal icing runout and the lettering black fondant.  The final touch was to add the ends of the belt, complete with four black stripes.

An additional challenge in this case was how to make it easy for their mother to get the cakes to the party.
I addressed this by placing each one on a cake tier stand inside a plastic box packed with mini ice-packs.
The cakes arrived safely and needed only a short time to soften before they were consumed.