Made before I had seen the movie – for my about-to-be-three-year-old who had – the completion of the Mater cake relied on many trips to the local toy store to study his main features.  (The Cars movies have since become great favourites of mine.) 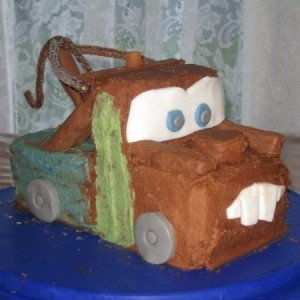 He’s constructed from layers of sponge covered with chocolate buttercream, with Galaxy Ripple as struts and cola string for a tow-rope. Coloured buttercream rust and paintwork were added, then fondant teeth, eyes and wheels attached.

To say it went down well would be something of an understatement!