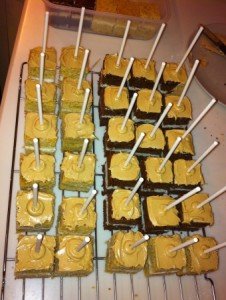 It seems that everyone between the ages of about 7 and 14 is currently obsessed with Minecraft, and my son’s best friend Alex is no exception. “May I have Minecraft chest cake pops, please?”, he asks!  “Why not?”, I thought.
Well…   mainly because making cake pops tends to be way more hassle than it’s worth!

After looking at pictures of Minecraft for rather longer than I might have liked, I worked out my design, colours and construction process:

First, I made sheets of Victoria sponge – half plain, half chocolate – sandwiched them together with buttercream and cut them into roughly 3cm cubes, gluing the sticks in place with coloured royal icing.

While they were setting, I made some holes in some polystyrene (styrofoam) blocks so I had somewhere to put the pops after each stage. 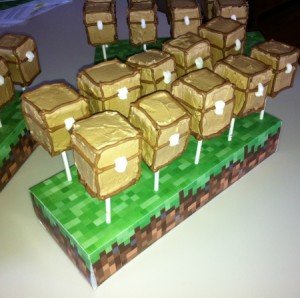 Then, I finished icing each cube with the base colour and placed them in the “drying stand”.  It’s amazing quite how uncomfortable it becomes, holding and rotating a tiny stick with a weight on it!

When they were dry, I used a darker brown to ice along each edge – as well as around the chest 2/3 of the way up to represent the lid – then added the clasp in white.

Then I had to figure out how to display them for the party.  I used an image I’d found online to make up some “grass block wrapping paper” that I printed and used to turn the drying rack I’d made earlier into a themed display stand.

The birthday boy was thrilled, and so were his friends.
These Minecraft cake pops looked great and tasted even better!